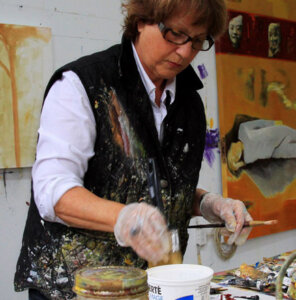 Renée duRocher was born, and currently lives and works in the city of Granby, Quebec. Having been active in the visual arts since 1976, duRocher has a large number of solo and group shows to her credit, both in Canada and abroad.

Renée duRocher is an artist consumed by history and color. She uses figurative and intuitive painting techniques to call time and history into question. With history permeating landmarks, archaeological and sacred sites, she attempts to address and depict these historically significant scenes. She tells a pictorial narrative within a passage of time, exposing the fragility and impermanence of the human race.

Her creative process has been compared to that of Riopelle, as famously quoted, “I don’t paint nature, I paint the impression it has on me”. In the same way, she blends her vision of history with her vivid imagination. Although her works are expressed in a contemporary aesthetic, the old and new merge to create its own place where explorations of the ephemeral, the divine, and eternity intersect.

Filling her canvases with broad strokes of rich contrasting colors, duRocher paints the different facets of time; time lingering, passing and fleeting. Bridging between ancient and contemporary, the figures in her works are a reminder that we, too, are a treasure of the past in the making.