Abstractions by Anne Marchand At Sacred Heart University’s Discovery Science Center
Hubert Jackson’s NASA Heroes and Sheroes, 2019, recently acquired by the National Air and Space Museum, pays homage to contributions made by Black women and men in the space program. 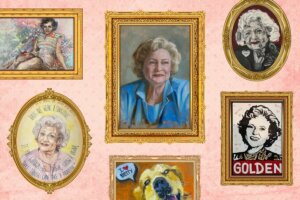 DC art scene veteran hosts gallery in her own home
While many are social distancing, one District resident is inviting more people into her home-turned-gallery, By Grace George | Tuesday, September 15, 2020

RTV CHANNEL 4 | Slovenia News
How Galleries are adapting to the challenges of the pandemic | September 17, 2020
Call for Changes to Capitol Hill Statue of Lincoln Standing Over Freed Black Man
By Shomari Stone • Published June 16, 2020•

Washingtonian- How 14th Street Came Back, by Marisa M. Kashino

The Washington Post- In the galleries: Zenith celebrates 40 years with two exhibitions in two spaces, by Mark Jenkins

October 31, 2017- The Hoya- Empowering Women through Art at the Zenith Gallery, by Maddie Finn

May 1, 2015, The Washington Post- Inspired by Their Homelands and Beyond, From Every Walk of Life: The Paintings of Davis Morton, by Mark Jenkins

November 20, 2014, DCIST- The Best Galleries And Art Collections In D.C., by Nicole Dubowitz

August 15, 2014, The Washington Post- Passion of the Media, Review by Mark Jenkins

February 12, 2012- The Washington Post- Downtown Art gets an out-of-office message, by Mark Jenkins

Margery E. Goldberg to Be Honored for Contribution to the Arts — March 15, 2010

Mar 17, 2010- DC Commission On the Arts and Humanities- ART(202) Journal: The Community, Published by Issue

March 13, 2009, Washington Post- Everything from A to Zenith: An Eclectic Venue Calls It Quits, by Jessica Dawson