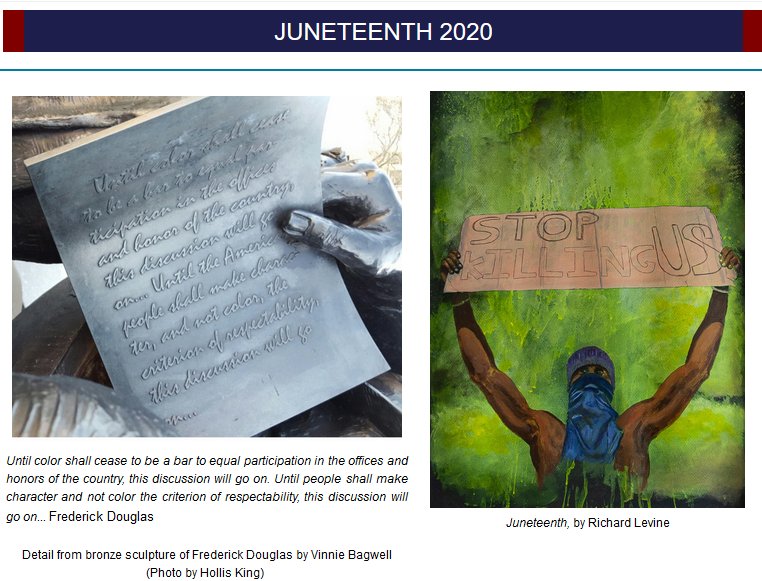 Over the centuries and millenniums freedom has come with a huge cost. Not the least of which is human lives. When you grow up Jewish you are quite aware of those costs. My family took Freedom for All very seriously. In high school I wrote reports on the evils of Apartheid.
My first year in college I wrote a paper about the Black Panther party and went to their headquarters in DC to research. I recently found the paper I wrote. I was indicted by GWU for painting on the sidewalk (in water base paint) for my final project in my dance composition class when I threw a Happening I was painting Jail Nixon-Free Bobby. 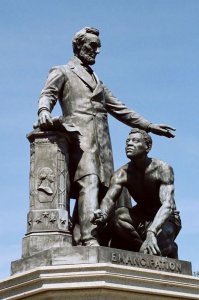 Fast forward – today we are taking up the cause to rebuild a statue which has caused much pain over the years. This being the Emancipation Memorial, also known as the Freedman’s Memorial or the Emancipation Group, located in Lincoln Park in the Capitol Hill neighborhood of Washington, D.C.
Frederick Douglass, who dedicated this statue, was quite disappointed in Thomas Ball’s depiction of the ex-slave in shackles at Lincoln’s feet. We are proposing to remove the kneeling man and replace him with a standing black man, as was initially imagined. The funding drive for the monument began, according to newspaper accounts from the era, with $5 given by a former slave, which would be about $120 today, a lot of money at the time. We are beginning to work with the National Park Service on this project. We would like to raise the money by asking everyone to pitch in $120, symbolically honoring the sacrifice of the original contribution.
We would love to commission nationally known Washington artist, Vinnie Bagwell, who can give new voice to the ancestral story in the manner intended. We will show you some of her other work, including a statue of Frederick Douglass, which she has done more than once. She completed a fabulous sculpture of Marvin Gaye in Marvin Gaye Park in DC. Below she describes her Frederick Douglass piece. Ms. Bagwell expresses so eloquently what it feels like to create these important icons.
We are also showing several other artists whose work depicts the civil war. Hubert Jackson, Curtis Woody and Richard Levine. 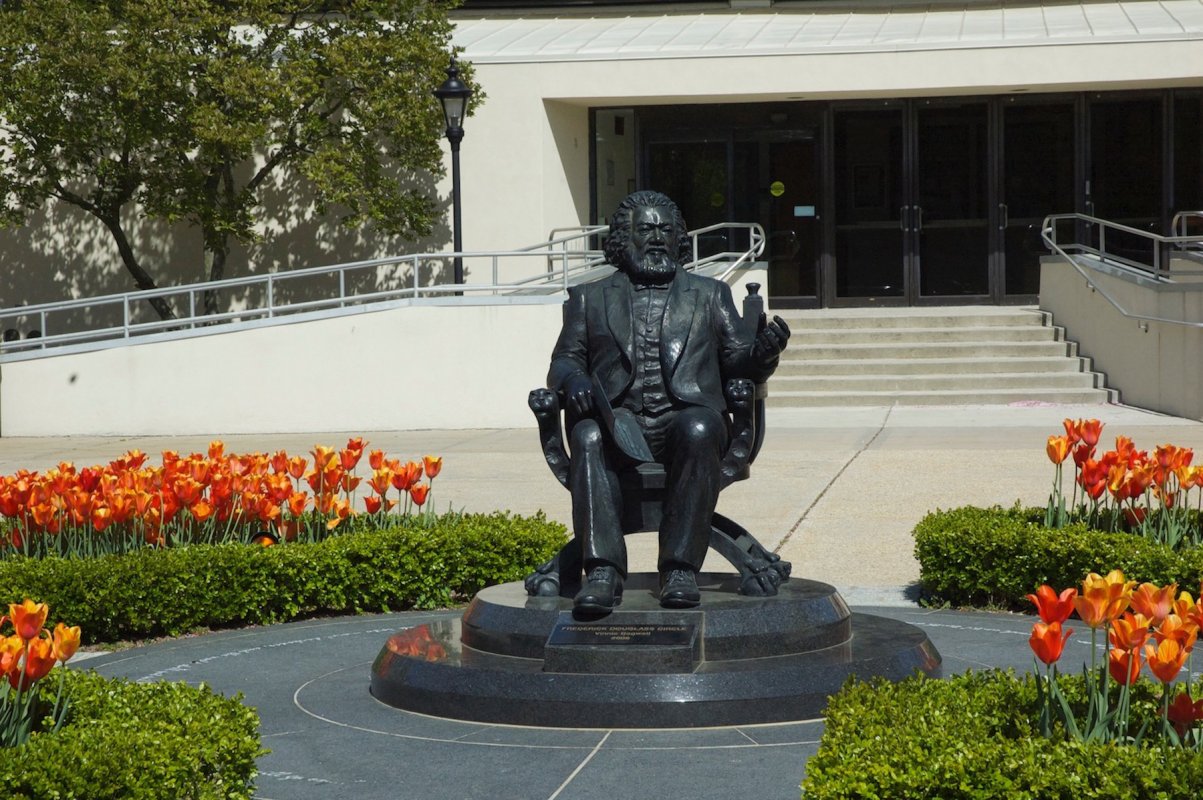 “Frederick Douglass Circle” was originally designed for the City of New York Central Park Conservancy’s 2004 Frederick Douglass Circle Public-Art Competition for the northwest corner of Central Park in New York City. The 24″ h. maquette was purchased by the Frederick Douglass Museum and Cultural Center in Highland Beach, Maryland, with funding from Black Entertainment Television (BET) as a centerpiece for the great room in 2005. In 2008, a 7′ bronze of the design was commissioned by Hofstra University in Hempstead, New York to celebrate “the history, achievements, and aspirations of people of color”.
A representational bronze sculpture of Frederick Douglass, seated in an antique chair, embellished with panther-head armrests and clawed feet, makes an intense hand-gesture to impart his point: “Until color shall cease to be a bar to equal participation in the offices and honor of the country, this discussion will go on… Until the American people shall make character and not color, the criterion of respectability, this discussion will go on…” The words are legibly embossed on the paper he holds.
The bronze rests upon a two-tiered, polished Mesabi® black granite pedestal. A 15′ d. textured granite apron surrounds the 6′ pedestal. A continuation of the above quote, sandblasted in-pavement, states “…In a word, until truth and humanity shall cease to be living ideas and mankind shall sink back into moral darkness, and the world shall put evil for good, bitter for sweet, and darkness for light, this discussion will go on…”
Viewing the sculpture from behind: The back of the chair has a bas-relief image of an enslaved African in shackles. “AM I NOT A MAN AND A BROTHER?” is etched in the ribbon below him.
Artists are the stewards of civilization, and art in public places defines who we are as people and provides an account of our history for the next generation. When I began sculpting in 1993, there were few examples of African Americans as “people” in public art, and even fewer black sculptors doing the work. That hasn’t changed very much.
There comes a point in your life when you realize your place in the link to the past and the future, and I realized: No one will do this for us, so I faithfully portray the innermost thoughts and feelings of people of color, with all the fire and romance which lay dormant in our history. I believe that people, such as myself, are not only choosing art, we are choosing the life of the artist. Art offers us a different way of living. My happiness is achieved through fidelity to a worthy purpose.
Vinnie Bagwell 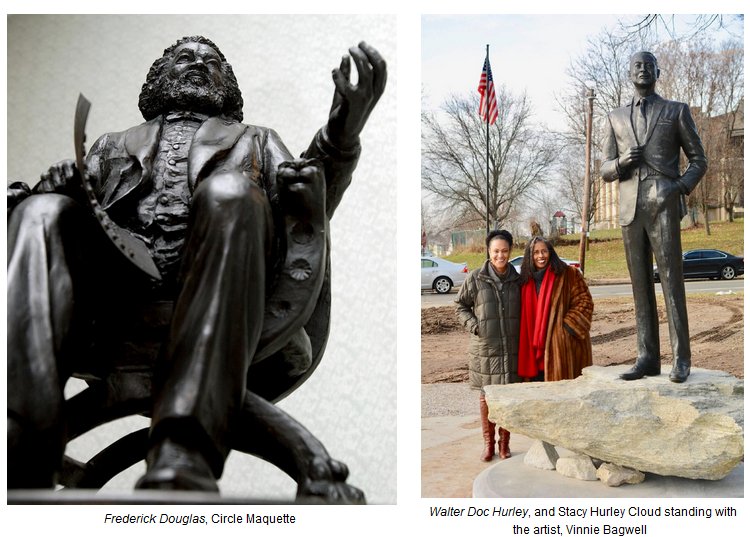 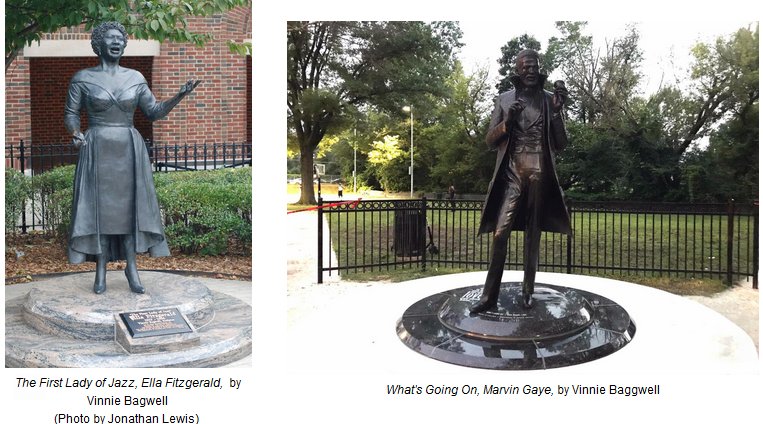 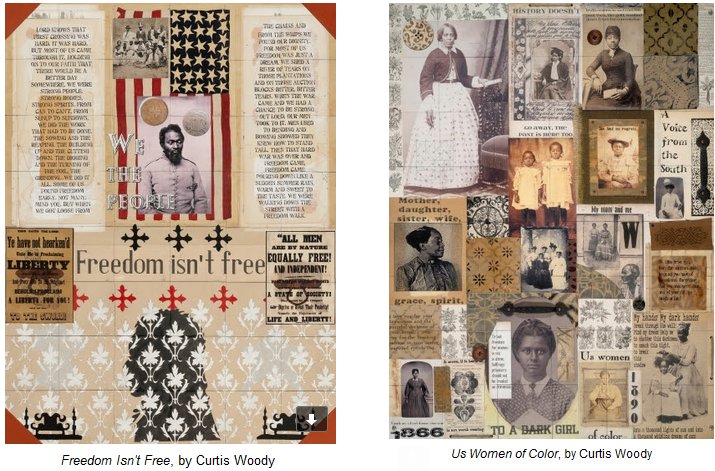 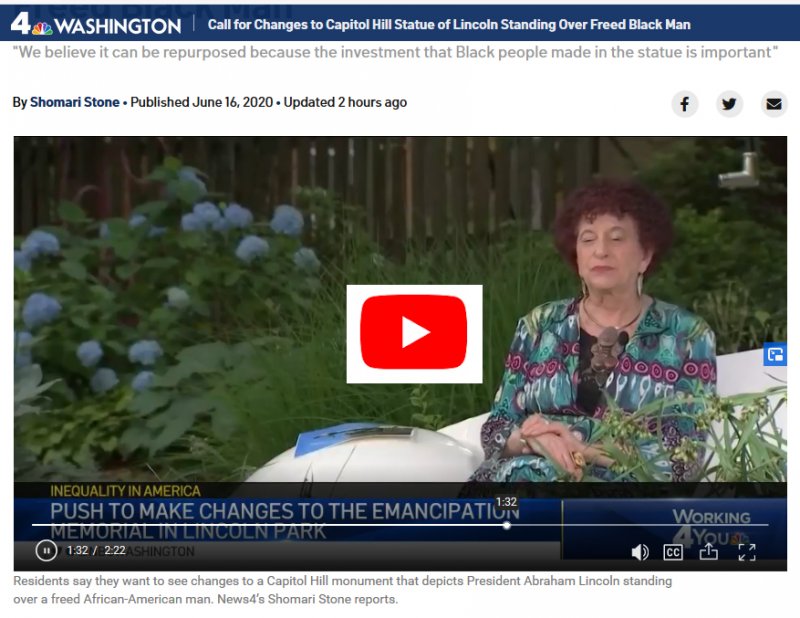 NEWS CHANNEL 4 – Call for Changes to Capitol Hill Statue of Lincoln Standing Over Freed Black Man “We believe it can be repurposed because the investment that Black people made in the statue is important” By Shomari Stone * Published June 16, 2020 *